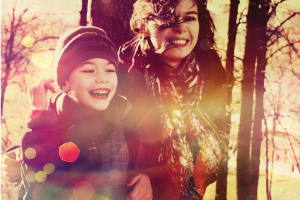 “Heavy burdens on small shoulders – when children care for relatives”, a film by Helen Arnet

How does 12 years old Sarah cope with everyday life while her mother suffers from polyarthritis? What household tasks does she perform that go beyond the normal amount of chores? Does 15 years old Joël sometimes feel that his needs are neglected next to his brothers Alain (17) and Olivier (10), both of whom have Down’s syndrome? How does he, the middle brother, deal with his leader role? How does he shoulder the responsibility? And what would have helped 28 years old Anja in retrospect when her mother was terminally ill and desperate? What would she have needed to deal with the difficult private and school situation?

Sarah, Joël and Anja are the central characters in the empathetic  DOK-film Heavy burdens on small shoulders – when children care for relatives by Helen Arnet, which was broadcast on Swiss Television SRF 1 on 20 September 2018 at 8.05 pm. They have in common that they had to take responsibility at an early age. Just like them, almost eight percent of the 10 to15 years old in Switzerland are in the same situation (learn more about the quantitative survey) – They are young carers.

You can watch the video (in German) here.

Young Carers are a focus research topic at Careum Research. The nationwide publicity gained by this TV programme is important. Like this, research results are not confined to the scientific ivory tower, but are spread to raise the awareness of affected families as well as of education, health and social affairs professionals who are in direct contact with Young Carers. And last but not least, the results catch the attention of political stakeholders.

Further research is crucial. Hence Careum will continue its research with national and international projects. A new focus lies on the transition from school to work life. International studies demonstrate that children and adolescents who take care of loved ones often suffer long-term consequences such as school issues, lack of concentration due to sleeping problems and frequent absences, which can lead into poorer educational opportunities.

“Young Carers do not want to be seen as victims. They want our appreciation and understanding,” Agnes Leu says, head of the Young Carers’ research programme. To provide support for the affected children and young people, teachers, instructors, doctors and professionals need to be aware of the problem. Only then will they be capable to approach young carers, who often draw negative attention because they are late, overtired and unfocused. “Political and social measures are required so that Young Carers can be supported at school, training and work,” Agnes Leu says, whose primary goal is to obtain equal chances for Young Carers. A first step in this direction has been made with a large survey online, the first to provide reliable data on caregiving children and young people.”

Recent interview with Agnes Leu (Careum Blog, in German): “I was amazed by the high number”.

Copyright ME>WE - All Rights Reserved - The European Union support for the production of this website does not constitute an endorsement of the contents which reflects the views only of the authors, and the European Union institutions and bodies cannot be held responsi­ble for any use which may be made of the information contained therein.
Back To Top
This site uses cookies: Find out more.